I was lucky enough to have caught Lorna Crozier’s talk about writing and risk held at the Vancouver Island Conference Centre in Nanaimo on May 3rd. It was part of the four-day event put on by The Federation of BC Writers.

She began her talk by quoting Margaret Atwood who said that in some countries writers and poets are killed for their words. But in Canada, no one hardly bothers to read poetry or to take their words seriously. This was not quite true as the Dodd’s Narrows room had to be opened up to accommodate the multitudes of people who came to hear her speak on a warm Friday afternoon in May.

From her perch on the podium, through hot pink-framed glasses, she read with precision, emotion, and humour. She only wavered for a moment, holding back her tears, giant heart-shaped necklace swaying, as she talked about the work of her late partner Patrick Lane who died only a short time ago, on March 7th of this year.

She claimed you should not stop creating when you are old, to make room for younger less experienced poets. Why should the old be silenced? Isn’t there more to learn from someone with years of living experience? She also brought up the point, why should an older poet be expected to only write poems that are proper and dull? At least that’s what I got from her one hour talk that was set out in 15 stanzas or parts.

She told of how her poems on penises from years ago had her banned from winning an award ( at the time) and how she got hate mail about it. But since then, of course, she is draped in awards. She explained how she worried about her poem about sex between two old lovers would get more hate mail but people loved it and still do. She read it to the audience peppering it with real-life anecdotes, how Patrick said, we’re not as feeble as your poem claims.

She told the story of writing her truth about her family’s life with a drunk father, thinking that the anthology wouldn’t do very well, but of course, it sold thousands of copies and eventually was read to her mother’s congregation.

But even so, Crozier explains how important it is to write about what you need to say.

Those are the risks that are important for a writer. Crozier is someone who has taken countless risks and it has only worked in her favour.

Here is an excerpt from the internet which I noticed is not always accurate with certain words that spell check always seems to want to change.

What The Soul Wants 2
The electric in eel. One rib from any kind
of whale. A moon snail’s thick grey neck.
Garlic Scapes. A dear companion. A skinks
blue tongue. Think of all the blue things
it could say. 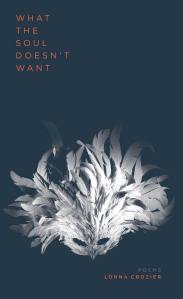 Here is a saucy note from the bottom of Crozier’s author website:

An Officer of the Order of Canada, Lorna Crozier has been acknowledged for her contributions to Canadian literature, her teaching and her mentoring with five honourary doctorates, most recently from McGill and Simon Fraser Universities. Her books have received numerous national awards, including the Governor-General’s Award for Poetry. The Globe and Mail declared The Book of Marvels: A Compendium of Everyday Things one of its Top 100 Books of the Year, and Amazon chose her memoir as one of the 100 books you should read in your lifetime. A Professor Emerita at the University of Victoria, she has performed for Queen Elizabeth II and has read her poetry, which has been translated into several languages, on every continent except Antarctica. Her latest book, What the Soul Doesn’t Want, was nominated for the 2017 Governor General’s Award for Poetry. In 2018, Lorna Crozier received the George Woodcock Lifetime Achievement Award. She lives on Vancouver Island with two cats who love to garden.

View all posts by starfish